Birds on the brain, etc. My encounters with birds and animals, butterflies and trees, and anything else in nature…

It was night when we arrived at Sisira’s River Lounge on the banks of the river Kelani in Kithulgala, the next stop on our Sri Lankan birding trip. After four days, we had a wonderful dinner – Sisira was an executive chef with the Taj group and has worked in India – and went to bed wondering if Kithulgala would be as abundant as Sinharaja had been…

a brown-capped babbler, and a lesser yellownape.

Along the riverside, we saw several green imperial pigeons. In a neighbouring garden, we found the endemic chestnut backed owlet calling away…

If pre-breakfast birding was so good, we couldn’t wait to find out what awaited us after the lovely breakfast that Sisira had laid out for us. For this, we had to cross the Kelani river and go into the rainforest on the other side. This was accomplished by means a narrow catamaran dugout – it was a bit scary to get in, but the ride was great fun! If only the river wasn’t so narrow, we could have had a longer ride!

Thankfully, the leeches appeared to be resting. Chami took us on a quest for the brown hawk owl, which didn’t want to be met. On the way, we came across a couple of kangaroo lizards, one with a huge moth in its jaws…

To see something special, you have to make an extra effort. Especially when it happens to be a very rare and rather sensitive bird. We trekked through densely forested hillsides sloping at a 45o angle, following Chami’s exhortations to remain absolutely silent, to see the bird of the trip – Sri Lanka’s newest endemic discovery – the Serendib scops owl! What a present for all of us on Garima’s birthday!

Don’t you think this beautiful bird has a face like Lord Ganesha? Though we remained very quiet, those large lovely eyes followed our every movement. Chami said that it would change its roost now that it had been spotted.

(Sorry about the shake…)

On the return trek, we saw a Malabar trogon and a Tickell’s blue flycatcher.

I am blue, in more ways than one…

After lunch, Chami drove us to a rubber plantation, with many birds busy getting their evening meal. There were Layard’s parakeets, chestnut headed bee-eaters, white-browed fantails,

What do you mean, my hairline is receding!

and the red backed black rumped flameback, which is endemic to Sri Lanka. 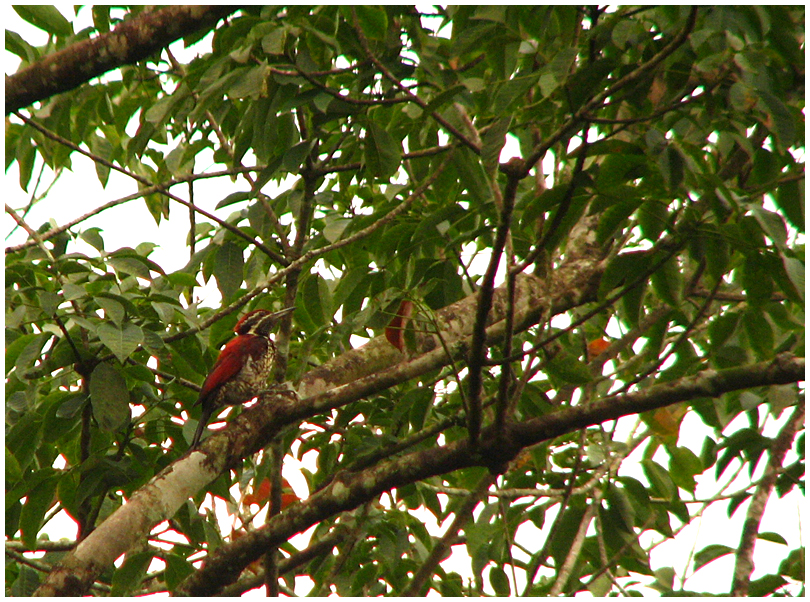 You should see my cousin, the crimsonback!

Next morning, Chami took us to a riverside location to get shots of Layard’s parakeets and hanging parrots. Having missed seeing the green-billed coucal earlier, Garima and I headed back to Sisira’s. We found one in a jackfruit tree and tried hard to get a decent shot. Soon the others joined us and the green-billed coucal led us in a merry chase, during which we entered a garden with an incessantly barking dog. A yellow fronted barbet was hopping around outside.

If only my bill had been red, it would have complemented the blue, yellow and green I sport…

After a bit, the dog gave up, but we didn’t, and in the tree in which the green-billed coucal had hidden itself, we saw a brown headed barbet. 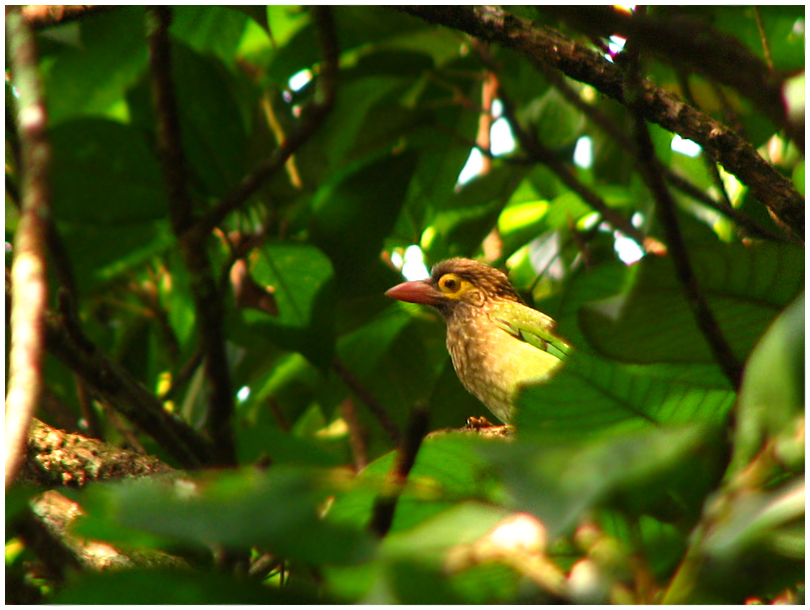 My bill is red, but my eye patch is yellow rather than orange…

On the way back, we ran into another Indian pitta!

And got a good look at some black bulbuls. 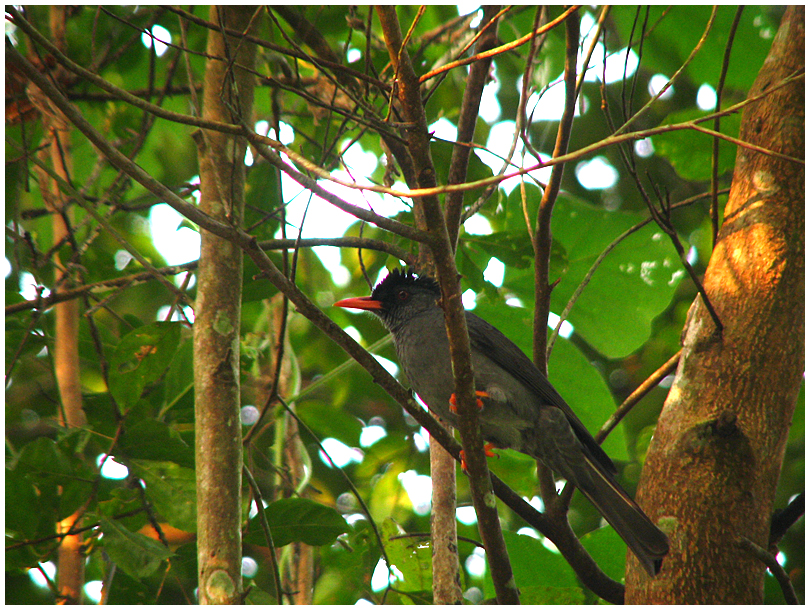 Black is beautiful, I always say…

Back at Sisira’s, we got a close look at a chestnut backed owlet, but I missed seeing the rufous woodpecker.

Who is better looking, Serendib’s or I?

After breakfast, we started for Nuwara Eliya, a long, tortuous, uphill drive that was hard on a few of our tummies. En route, we stopped at a beautiful tea estate called St Clair’s.

The vistas at St. Clair’s were scenic, with a couple of lovely waterfalls…

The route took us through endless stretches of tea gardens – all of them created at the expense of the rainforest.  I asked Chami if the forest would survive the tea industry, and he didn’t answer. Here’s a video of a partially deforested hillside…

We reached Nuwara Eliya in pouring rain and freezing cold, so the first order of business was shopping for jackets. A brief visit to Victoria Park gave us a glimpse of a forest wagtail. As it grew dark, we headed to a wooded area where we got another brief glimpse, this time of the scaly thrush. Then it was too dark to see anything, so we headed to Humbugs bungalow – to hot showers, warm beds and a cute cat! 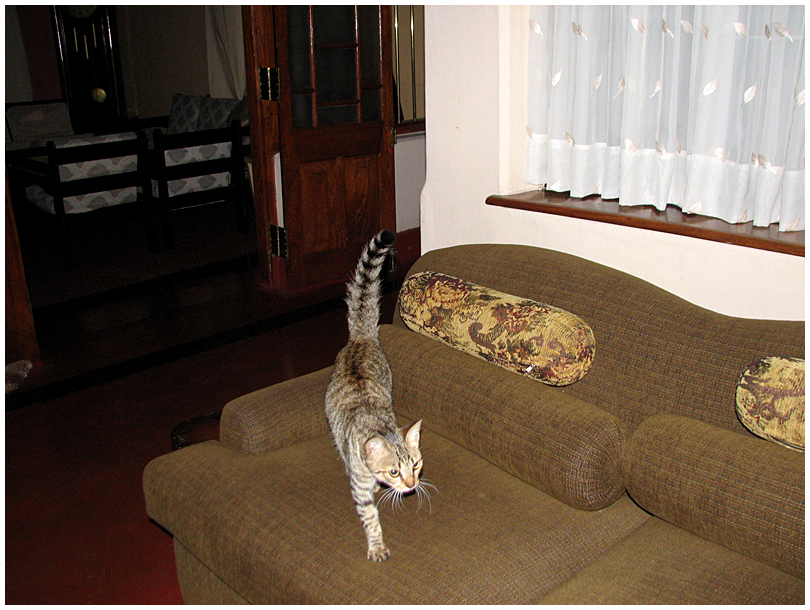 He didn’t have a name, so I named him Humbug! 🙂

Imagine waking up at 3 am on a freezing morning and driving for two hours to see a bird that shows up only at the crack of dawn! That was our tapasya this Diwali day – reaching Horton’s Plains at 5 am in pitch darkness – waiting for daybreak to see the Ceylon whistling thrush! It is an extremely rare and difficult bird to see. We got out of the van as the light crept into the sky, and saw an Indian blackbird in the gloom – but no thrush… Chami told us that he had seen a whistling thrush couple nesting near the ladies’ toilet on his last visit. So we stood some distance away, with our eyes fixed on the entrance to the toilet. Still no thrush. Suddenly three minibuses pulled up and disgorged a horde of elderly European women – at least 20 of them, dressed in colourful outfits, conversing loudly. On this freezing morning, what could they do but make a beeline for the loo! We gave up hope of seeing the thrush and walked around in the drizzle. Then, out of the mist, the thrush whistled – and bestowed darshan on us! Not only the male, the female too! Our tapasya did bear fruit!

This thrush has a high-pitched whistle, unlike the more melodious song of the Malabar whistling thrush.

In spite of the mist and drizzle, we saw a dull blue flycatcher couple, (here’s the female preening)

Seen anything cuter than me?

Is my face purple? Come closer…if you dare!

As the sun rose and the mist cleared, Horton Plains revealed itself. 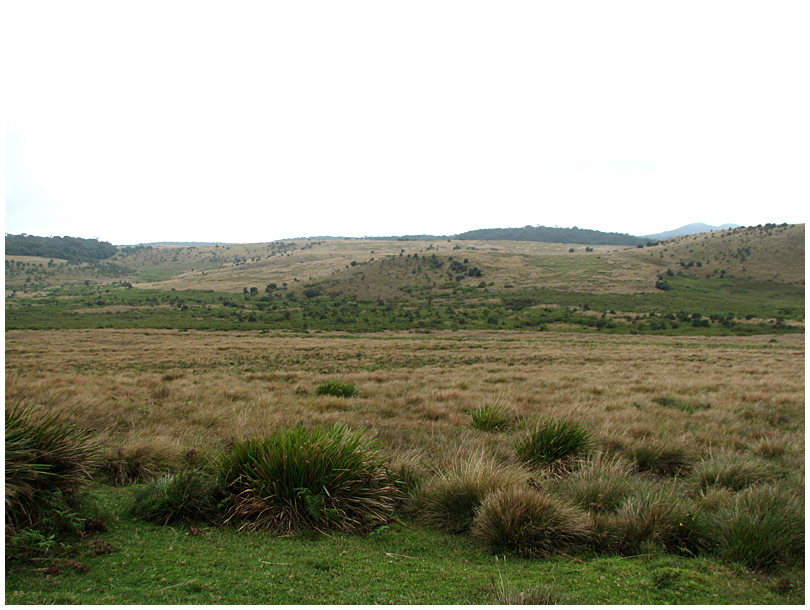 Not quite so plain at World’s End!

Hungry, we headed for the sanctuary canteen, where a huge male sambar called Raja allowed people to get quite close, though he wouldn’t take grass from my hand.

Chami then took us to the Pattipola railway station to see munias – instead we came across a flock of yellow eared bulbuls and a troop of purple faced monkeys, and some of us got good views of the Ceylon woodpigeon!

I’m Woody woodpigeon. Any animation roles for me??

Most of the afternoon was spent in searching for a place to have lunch (all restaurants were closed on account of Diwali). We ended up at the coffee shop of the Grand Hotel, where I had absolutely the worst pizza I have ever eaten!

Last day. We went to Victoria Park once again. It was dark and foggy… 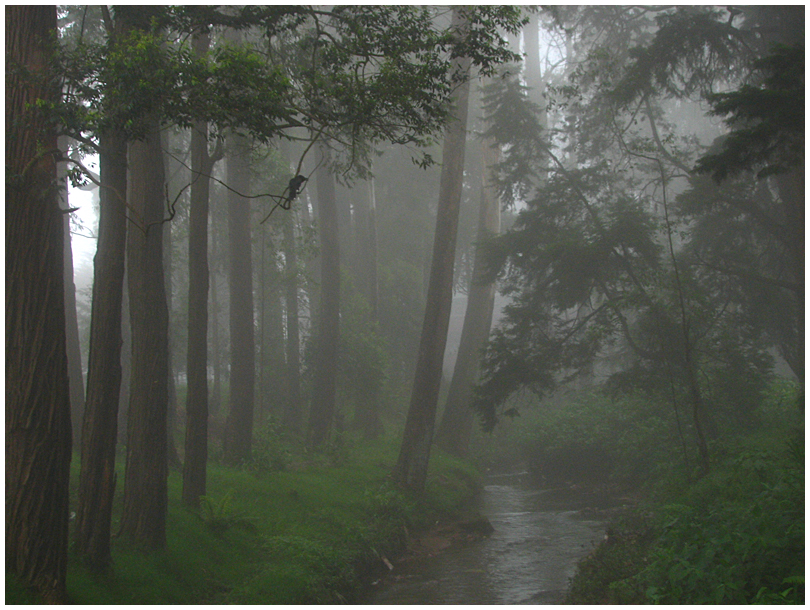 A forest wagtail foraged along the stream…

We got just a glimpse of a pied thrush. Then we headed to the scaly thrush place again and came across the last bonanza of the trip – a male Kashmir flycatcher busily displaying! We just couldn’t get our fill of it, when someone from the forest department chased us away, saying we were not supposed to do any photography there 😦

Since we had missed seeing the crimson-backed woodpecker, Chami decided to make a brief stop at the Udawattakele reserve forest at Kandy. It was almost 4 pm and getting dark when we entered the gates. Barely ten minutes into our walk, we realized that all of us had several leeches clinging to us and climbing steadily. These leeches were the quickest we had seen, and we ran back to get our leech socks. By then it was too dark to go looking for the woodpecker, though we heard its call. 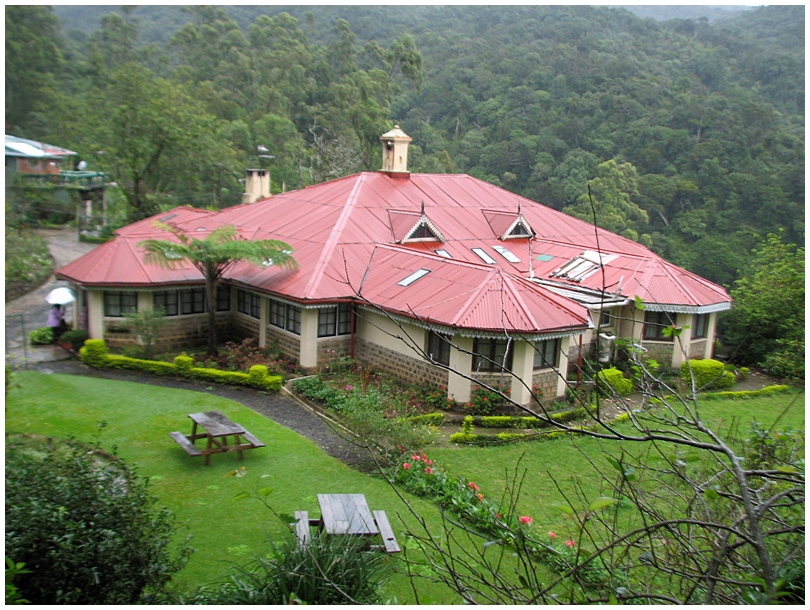 We reached Colombo late in the night, shopped a bit, ate some dosas (finally!!) and pizza (not me!) and spent the night at a homestay in Negumbo. Some of the others woke early to visit the nearby beach, where they saw some gulls and terns. Our departure was as dramatic as our arrival, as our 9 am flight was turned back to Colombo due to high wind speeds at Chennai. It took off again only in the afternoon, and it was well past midnight when we reached Bangalore.

Such drama, and much physical hardship!! But it was all worth it – the BULBs’ Sri Lanka endemics tour rocked! Thanks are due to Rajneesh for putting it together and to Chami for his indefatigable chauffeur-guiding! And to all the others for the vibrant company!

Wonder where we’ll go next…